Today marks the final release of SnipNotes for macOS! Thanks to all the beta tester, who provided invaluable feedback over the course of the last several months and made this release possible in the first place. SnipNotes for macOS brings many of the features you know and value from your iOS devices to the Mac. While the look and feel of the new app is very familiar, it is packed with a lot of features unique to the Mac. For example, you can quickly create new notes right from the menu bar and with keyboard shortcuts. The app offers drag-and-drop support, multiple note selection, automatic saving and more. 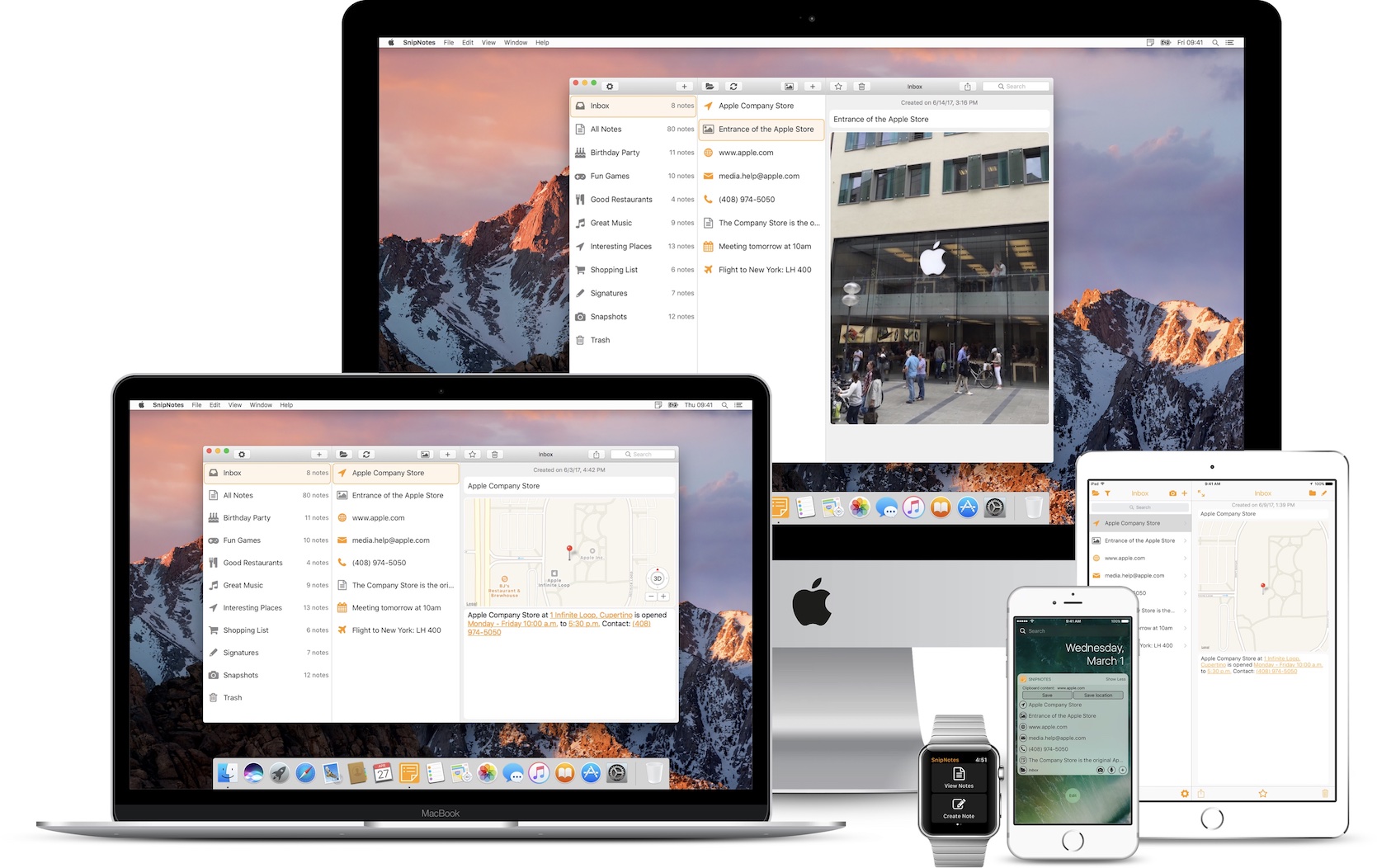 SnipNotes for iOS has also received an update today. Here is what's new:

Both apps are available with a discount for a limited time!

Here on the homepage you will find detailed information on both apps. I've created a new comprehensive overview about all the features SnipNotes has to offer on each platform. There is also a brand new help section, which will be expanded continuously and can also be accessed from within the app.

If you have any questions or feedback, please don't hesitate to get in touch with me. You can also reach out on Twitter.

After almost three months of development and six beta releases, SnipNotes 2.3 is finally available on the App Store as of today! This update is quite huge, it contains several new features, many improvements as well as bug fixes. Let's take a look. 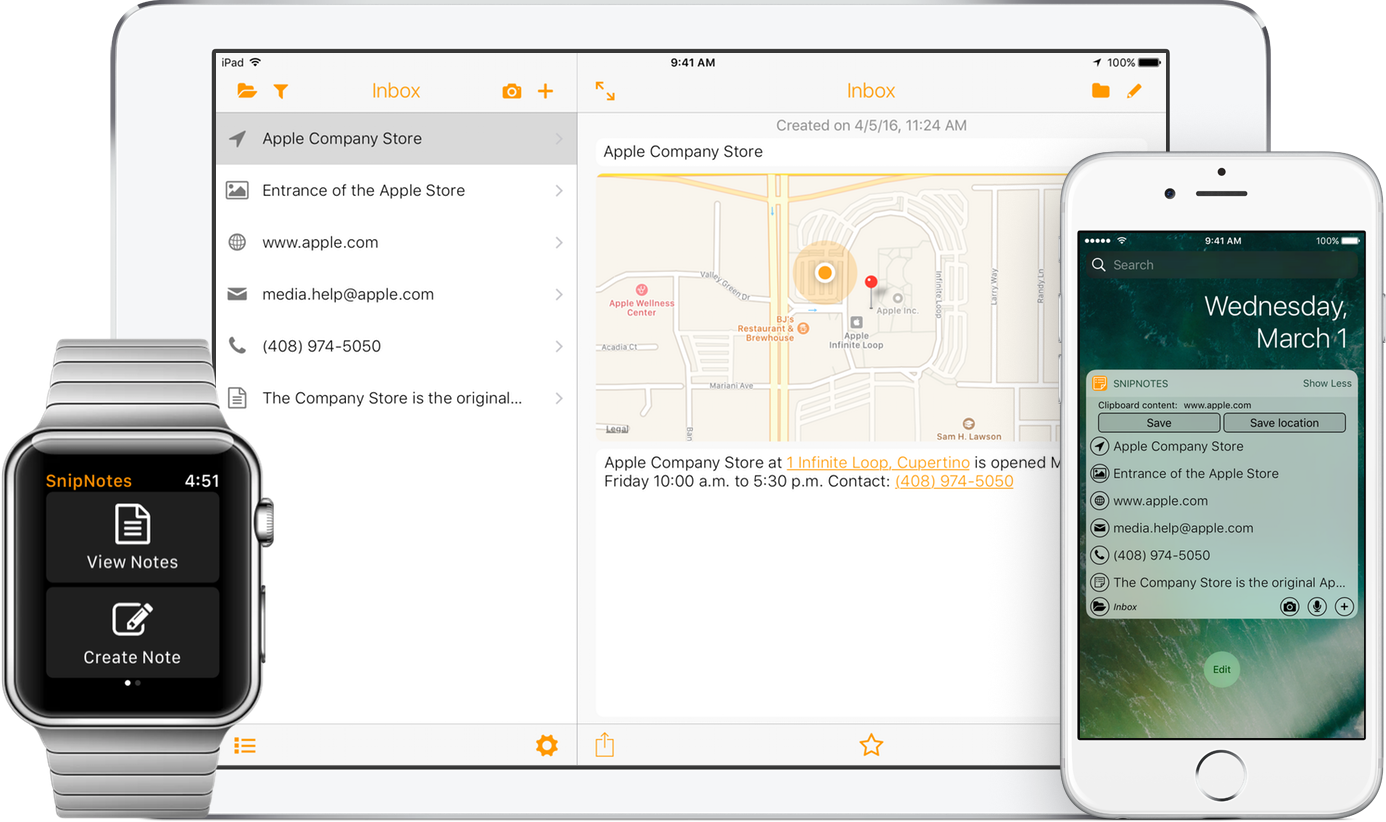 Two years ago SnipNotes was released on the App Store. Happy birthday!

The past year brought many innovations. Starting with SnipNotes 2.0 in May, which featured a new design and over a dozen new features. The second update in July added categories to SnipNotes. And in December the app was optimized for iOS 10. This year will even get better: A big new update is almost ready for release and SnipNotes for macOS will follow shortly after. And this is just the beginning. 😉

Thank you very much for your support and your constructive feedback. To an exciting new year!

A new major update is currently in development which improves and simplifies the usage of categories. Let's take a look. 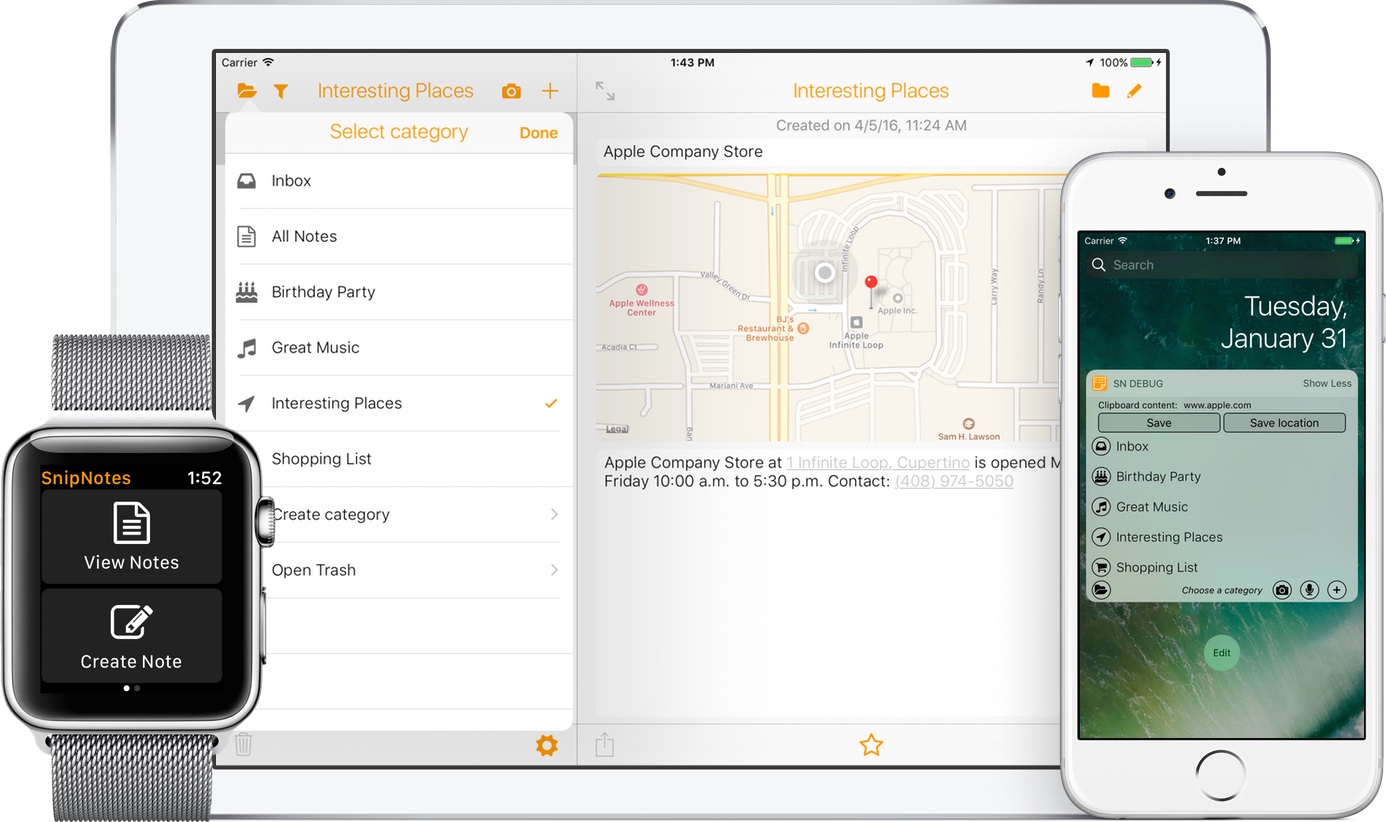 SnipNotes 2.2 has arrived on the App Store today! This update takes full advantage of 3D Touch, gives you more ways to create notes and optimizes the app for iOS 10. 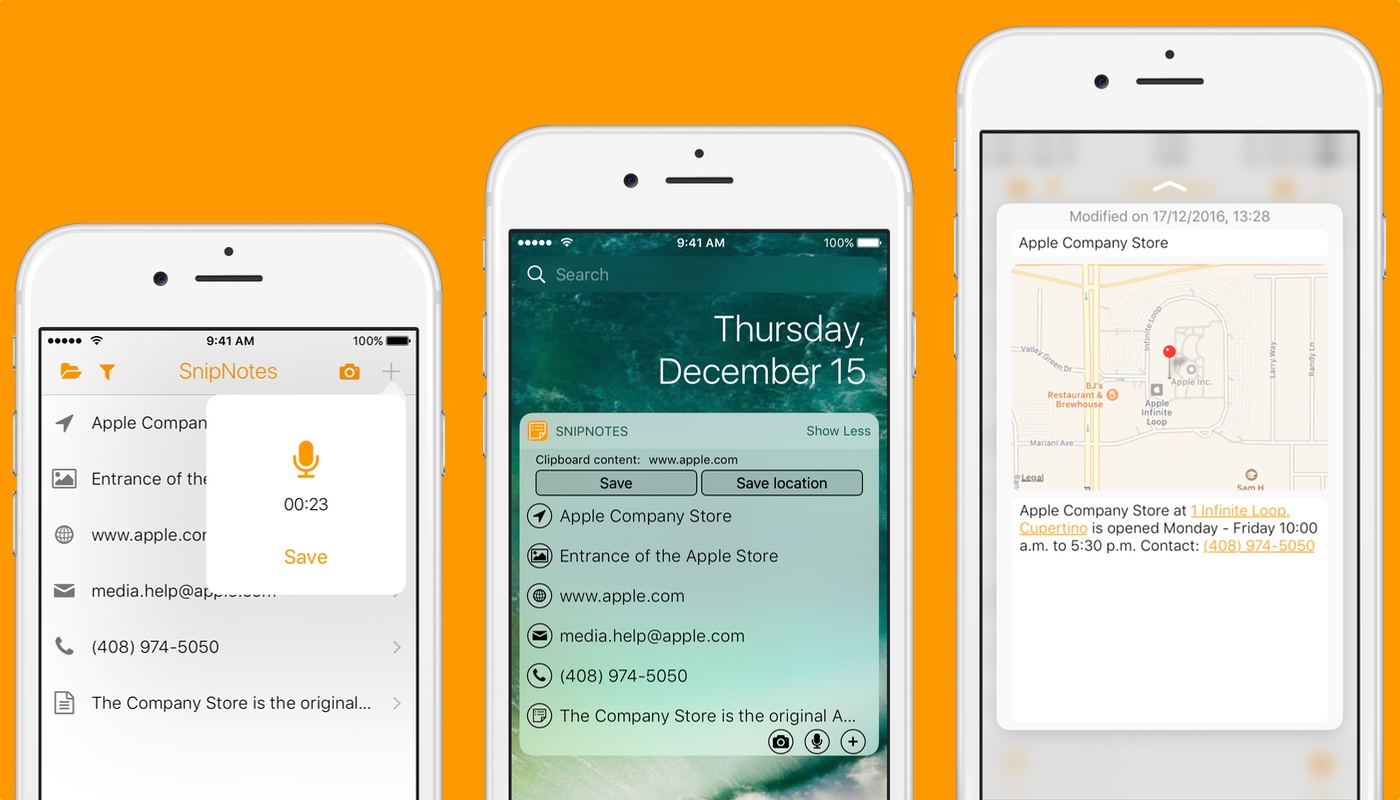 For a limited time, SnipNotes is available for just 99 cents!

Development of the Mac app is making good progress, the third beta is now available. That's a good moment to give you an overview of what's new since the first beta.

You have requested it, now you can take a look for yourself: I'm happy to announce the first SnipNotes beta for macOS! Development is far from finished, but I want to incorporate your feedback as early as possible. This is a completely new app after all. You can download the beta right below, there is no registration required. Read on to learn what's inside the first version and what's still missing. 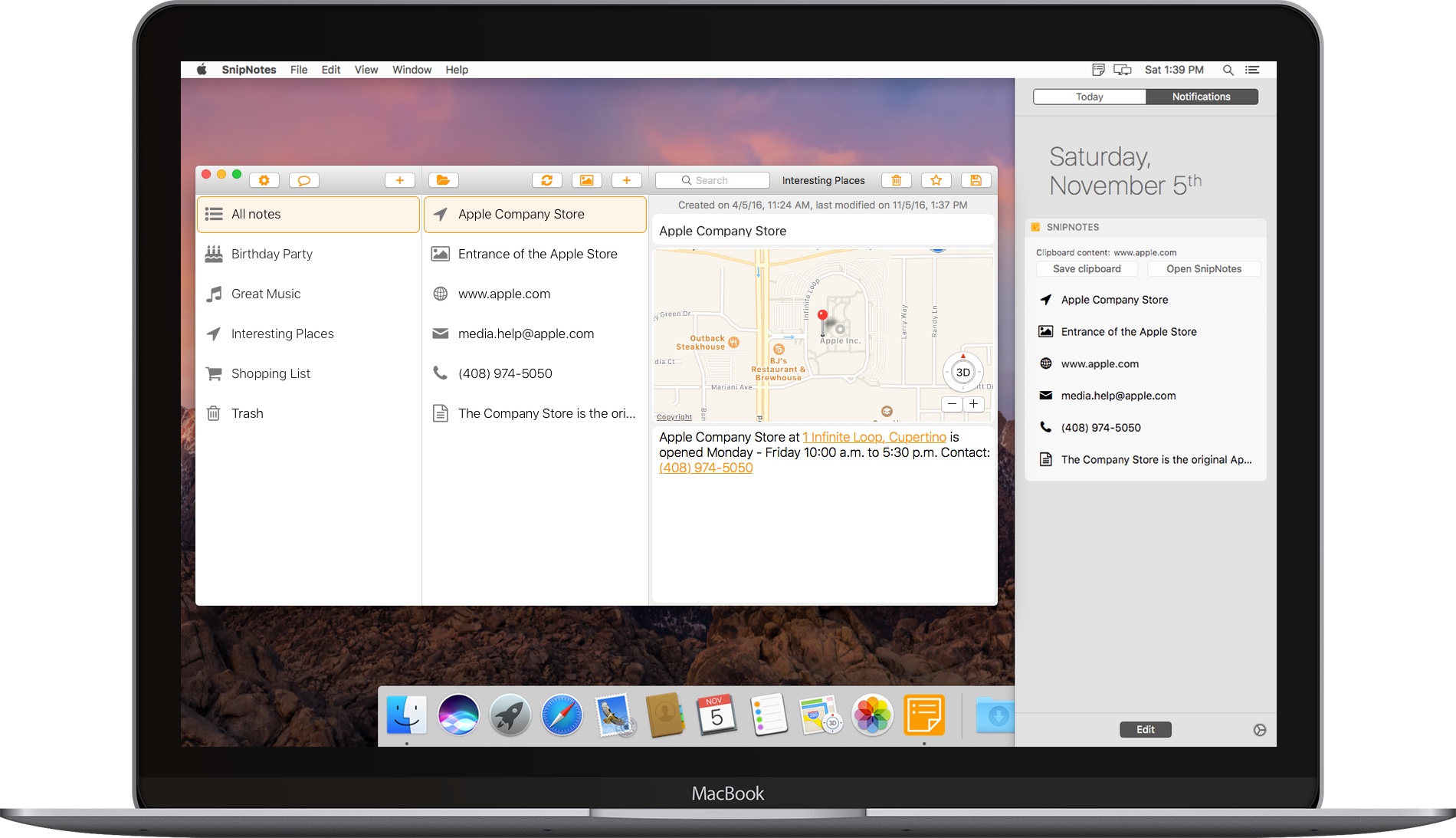 SnipNotes for macOS is now available for beta testing!Read More »

The wait is over, SnipNotes 2.1 has been released on the App Store today! 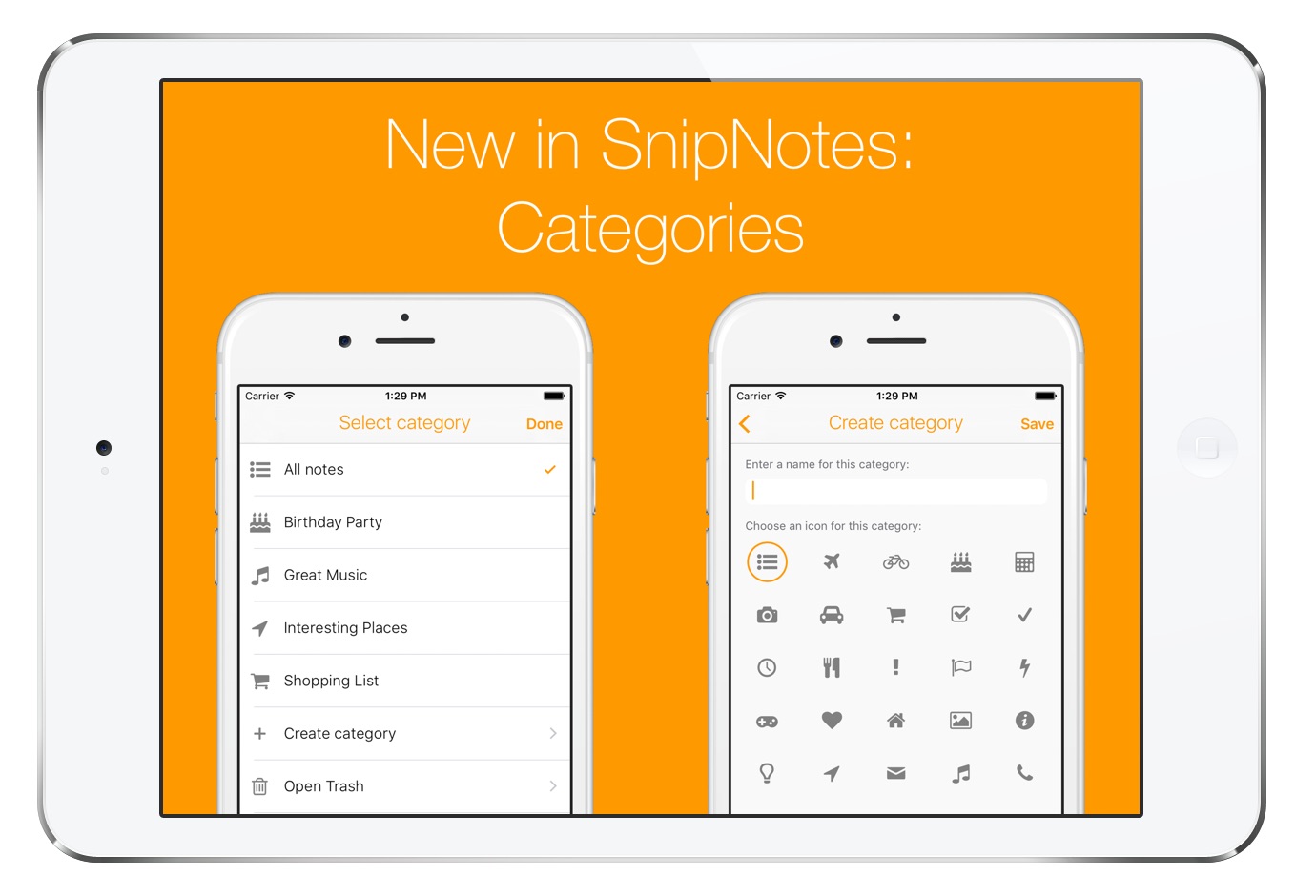 This update adds some of the most frequently requested features:

The new SnipNotes update is coming closer and it's time to take a look at the new features included in this update. I've already talked about the new categories, today I will introduce you to the new trash and other useful improvements. You can already try out these new features for yourself, simply sign up for the beta.

A safety net for your notesRead More »

A few weeks ago I gave you an overview about what's next for SnipNotes. A new big update is well on its way and will i.a. include support for custom categories, which help you with organizing your notes. This feature is already included in the latest beta release, you can sign up here to try it out. Today I want to give you a little more insight about how this feature is going to work.